A fair if brief wrap-up on the Temple Mount ends with this:

But in recent times, radical Right-wingers have refused to be satisfied with this [being allowed to visit the site under supervision but not permitted pray there] and have begun clamouring for prayer rights inside the compound itself. This has led to an increasing number of visits to the mount by Israeli activists, some of whom are said to have prayed surreptitiously, triggering clashes between Palestinians and the security forces.

This in turn has fuelled Palestinian accusations – refuted by Benjamin Netanyahu's government – that Israel is intent on overturning the status quo on the compound, which forbids Jewish prayer and cedes administrative control to Jordan. Yet the idea of Jewish prayer on the site is anathema even among many religious Jews. Many refuse to visit the site lest they enter an area where the Holy of Holies once stood, the most sacred part of the ancient temple and the place where the high priest – who entered only once a year on Yom Kippur (the Jewish day of atonement) – is said to have communicated directly with God.
According to tradition, ordinary Jews were forbidden to go to the Holy of Holies – whose precise location is unknown – because they were ritually impure.

Jews are at fault because we stand on our rights?

The New York Times published an analysis by Jodi Ruderon, Mistrust Threatens Delicate Balance at a Sacred Site in Jerusalem, which includes this relevant passage:

The real struggle over the site, however, is...between two peoples who seem unable to find a way to simply share. After triumphantly seizing the site during the 1967 war, Israel quickly turned back all but security matters to the Palestinian religious authorities, the Islamic Waqf. Now, as more and more Jews challenge Israel’s prohibition on their prayer in their religion’s most sacred space, many Palestinians fear that what they really want is to take over the entire compound and replace its Dome of the Rock with a third temple...“Enough is enough,” Rabbi Benny Lau, a renowned modern­Orthodox figure who had previously opposed Jewish visitation to the site, said recently. “It can’t be that Muslims stand on the Mount, pray as they wish under the Waqf rule, and the Israeli nation will be degraded to the depths.”


As for this bit in there - "The site has been a flash point since the advent of modern Zionism. More than 100 people on each side died in a week of rioting in 1929 over access to the Western Wall below" - see here.

But, again, the onus is placed on the Jews.

Arab intransigence, unwillingness to compromise or agree to arrangements of coexistence, their fanaticism and violence are ignored, downplayed or excused.

She quotes Yitzhak Reiter who tells her

“The extreme factions within both the Israeli and Palestinian communities realized that holy place is a symbolic asset, so to speak, in consolidating support for their struggle.”


The Arab terrorists are only a faction or has the entire "struggle" of the Arabs-who-refer-to-themselves-as-'Palestinians' been mainly extreme throughout all levels of the population?

She quotes one Ali Qleibo, a cultural anthropologist, who also composes poems, who tells her:

And here is another example of his thinking:


Until the early twenties, before the massive influx of European Jewish immigrants, both Christians and Jews were ethnic minorities. Whereas the Greek Orthodox Christian indigenous population maintained its own class structure and social position through the centuries, which was deferred to by the Muslims, the Jewish community, because of the transience of its members, was less rooted.

She quotes another Muslim, Mustafa Abu Sway, dean of Islamic studies at Al Quds University and a member of the Waqf council, who continues the prevarications:

Islam does not prohibit outsiders from praying at Al Aqsa. The problem, he said, is that Parliament members have declared rebuilding the temple as their real goal.

No non-Muslim can pray there or read from the Bible.  That includes Christians.

And this is the posterior prayer position of Muslims there: 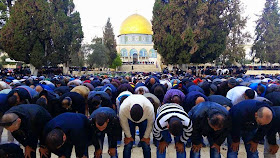 Their rears directed towards the sacred rock under the Dome since they turn towards Mecca.

All the news that fits the NYTimes' agenda.